Many tennis players take lessons on how to improve their open forehand stance and generate power on the return. As research has shown the open stance forehand is a pretty traumatic service and it can significantly impact the knee and hip. Over time the open forehand stroke can be a contributing factor in the development of a “tennis knee” or a “tennis hip.”  As these knee and hip injuries get more nagging, the player will employ braces, tapes, and anti-inflammatories to keep themselves on the court. As the injury progresses cortisone may be suggested. Eventually the injury will cause the player to stop playing or to seek other treatments including arthroscopic surgery. In this article I will suggest the possibility of injection treatments such as Platelet Rich Plasma or bone marrow aspirate stem cell therapy as an option to repair knee and hip damage and strengthen the joint.

The impact on the knee in an open stance forehand

A May 2021 published study (1) examined the open stance forehand and concluded it was more traumatic for the knee than the neutral stance forehand. The study authors compared motion, kinematics and kinetics at the knee during three common forehand stroke stances:

They then sought out to determine if the open stance forehand induces higher knee loadings:

The findings? The defensive open stance: a lateral run and then stroke had increased vertical ground reaction forces, maximum knee flexion and abduction angles, range of knee flexion-extension, peak of compressive, distractive and medial knee forces, peak of knee abduction and external rotation torques. What does all this mean? There is a lot of strain and forces on you knee when you are facing your opponent in the open stance and returning the ball. Consequently, the defensive open stance appears potentially more at risk for given knee injuries. 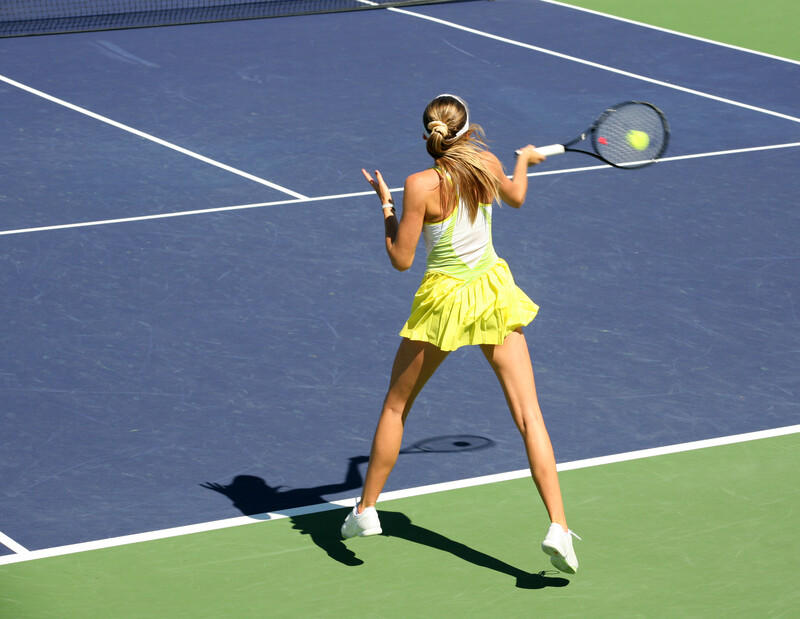 How about the hip?

The same authors also examined the hip. They published this research in December 2020 (2) Here they wrote: “The open stance forehand has been hypothesized by tennis experts (coaches, scientists, and clinicians) to be more traumatic than the neutral stance forehand as regards hip injuries in tennis.”

Again, the study authors looked at:

Everyone says the neutral stance is better, but during the match I find myself returning into the open or semi-open stance

Many tennis players will say things like, when I rotate my trunk or, turn my shoulder in open or semi-open stance my lead hip hurts. It does not hurt when I am in neutral stance though. I have to alter my game.

It can be challenging to alter a game when your natural tendency is to return the ball anyway you can. In the defense open stance forehand, the muscles, ligaments and tendons, the soft tissue that holds the hip joint together are put under tremendous joint loading (the weight of the body) stress.  Then from the planting of your feet comes the concentric (muscle shortening contraction) torque that generates the power of the return. Wear and tear or repetitive injury can be common in this motion. This is where problems of the labrum, ligament laxity and tendon wear can cause pain and reduced play performance.

Starting with the knee. All sports that require cutting, quick stops, acceleration and change of direction like tennis, racquet sports, basketball, football share a common thread of accelerated and extreme forces that strain the knee ligaments.

The knee can be injured in many ways during a tennis match including ligament injury, whether acute tear or degenerative micro-tearing. The ACL (anterior cruciate ligament), the MCL (medial collateral ligament) and the PCL (posterior cruciate ligament), are powerful ligaments responsible for holding the knee, the thigh bone (femur) and the shin bone (tibia) in their proper place in respect to each other.

When these ligaments suffer from excessive wear caused by a twisting motion they can overstretch and become lax. When the thigh and shin bone are allowed to become hypermobile they can grind down and wear out the protective padding between them, the meniscus and the articular cartilage.

There are many treatment options available to the athlete. Most physicians will recommend a conservative route rich in anti-inflammatory medications, ice, pain-killers, and rest. When these options fail, as most times they do, the next conservative option is to “live with it,” or have the surgery.

Is stem cell therapy an option?

Stem Cell Therapy is the injection of a damaged area of the body with stem cells that have been drawn from the patient’s own bone marrow. Stem cells are “de-differentiated pluripotent” cells, which mean that they continue to divide to create more stem cells; these cells eventually “morph” into the tissue needing repair—for our purposes, collagen, bone, and cartilage.

The excitement in the medical community is focused on how stem cells work, rebuilding the damaged part of the body from within by turning a diseased joint environment into a healing joint environment.

This is research published in the Orthopaedic journal of sports medicine.(9).

In the Journal of Knee Surgery (10) doctors from the Department of Orthopaedic Surgery, University of Pittsburgh had this to say:

PRP therapy treatments involve collecting a small amount of your blood and spinning it in a centrifuge to separate the platelets from the red cells. The collected platelets are then injected back into the injured area to stimulate healing and regeneration.

Doctors at the Mayo Clinic published research on ultrasound guided platelet rich plasma injections for treatment of symptoms associated with acetabular hip labral tears. What the Mayo Clinic researchers hoped to answer was whether PRP was safe and effective. The results were published in the American journal of physical medicine & rehabilitation.(9)

In our own clinical observations, we have seen good results using stem cell injections to help repair varying degrees of hip labrum injuries. We currently use bone marrow derived stem cells which are taken from the patient and reinjected into the hip labrum area. The decision as to which of these treatments to used is made at the time of the physical examination and a determination is made that the patient is a good candidate for treatment and should have a realistic expectation of treatment success.

Marc Darrow, MD., JD. is the medical director and founder of the Darrow Stem Cell Institute in Los Angeles, California. With over 23 years experience in regenerative medicine techniques and the treatment of thousands of patients, Dr. Darrow is considered a leading pioneer in the non-surgical treatment of degenerative Musculoskeletal Disorders and sports related injuries. Dr. Darrow has co-authored and continues to co-author leading edge medical research including the use of bone marrow derived stem cell therapy for shoulder, hip, knee and spinal disorders.

Stem cell and PRP injections for musculoskeletal conditions are not FDA approved. We do not treat disease. We do not offer IV treatments. There are no guarantees that this treatment will help you. Prior to our treatment, seek advice from your medical physician.

Neither Dr. Darrow, nor any associate, offer medical advice from this transmission. This information is offered for educational purposes only. The transmission of this information does not create a physician-patient relationship between you and Dr. Darrow or any associate. We do not guarantee the accuracy, completeness, usefulness or adequacy of any resource, information, product, or process available from this transmission. We cannot be responsible for the receipt of your email since spam filters and servers often block their receipt. If you have a medical issue, please call our office. If you have a medical emergency, please call 911.