In our practice we see many people with chronic ankle sprain reporting that surgery has been recommended as their only option. Why? Because chronic ankle instability is very common and unfortunately prone to re-injury or recurrent problems.

An estimated 40 percent of people who suffer from an ankle sprain will be left with long-term pain and weakness and up to 70 percent will eventually develop osteoarthritis. The reason is because the majority of ankle injuries do not heal properly after injury and respond poorly to the traditional methods of treatment.

There are three types of ankle sprain, separated into grades of severity. The first, a grade one sprain, is the least severe. This occurs when the ligaments are slightly stretched out, causing minimal tearing of the tissue fibers. This is the type of injury that doesn’t cause severe pain, and the victim can usually “walk it off” without permanent damage. A grade two sprain involves further tearing of the ligaments and can cause instability in the ankle joint. This type of sprain leads to a lot of swelling and tenderness, which makes it difficult to walk and move around. A grade three sprain is indicated by a complete tear of the ligaments, and will make itself known with extreme pain, swelling, and lack of function. 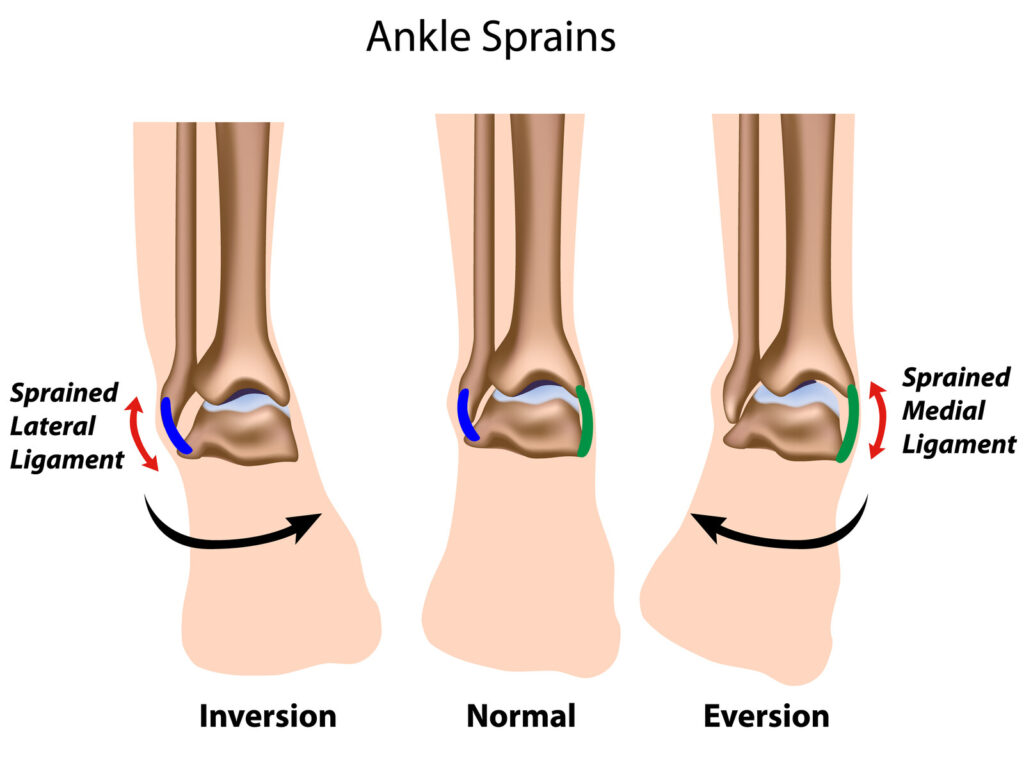 Sprinting and change of direction in chronic ankle instability

A May 2022 study (1) discussed rehabilitation programs: “Chronic ankle instability in athletic populations appears to be highly associated with declines in functional performance and to a somewhat lesser extent, ankle range of motion, strength and muscle endurance measures. This may suggest that optimal rehabilitation for athletes with Chronic ankle instability may require a greater focus on improving sprinting speed and change of direction ability in the mid to latter stages of rehabilitation, with regular assessments of these functional performance tests necessary to guide the progression and overload of this training.”

Mid-tarsal joint sprains are generally seen in athletes who play sport or activity where there is jumping and landing. The ligaments that are typically sparined and injured are the  calcaneocuboid ligament and the Calcaneonavicular ligament. Part of these ligaments join together as a bifurcate ligament.

An April 2020 paper (2)  wrote about the undiagnosed ligament injuries in the subtalar and midtarsal joints. “Ligament injuries around the subtalar, talocalcaneonavicular, and calcaneocuboid joints are often underestimated on clinical and imaging findings during investigation of patients with ankle and foot injuries. Because a delayed diagnosis of midtarsal ligament tears may lead to chronic pain and functional disability.”

While recognizing ankle sprain as a common injury in professional soccer, researchers discussed the lack of research on a concurrent injury to ankle sprain. That being a midtarsal sprain.

In this paper from February 2021 (3), 52 professional soccer players who underwent 59 MRI examinations after acute ankle trauma were assessed.

The conclusion of this study was presented as: “Our MRI study reveals that midtarsal sprain is a frequent injury in professional soccer players with ankle sprain. Midtarsal ligament findings on MRI combined with evidence of lateral ankle sprain is associated with a longer time of return to play compared to isolated lateral ligament injuries.”

This research followed an early study from 2018 (4) which wrote: “Midtarsal sprains are commonly associated with acute ankle injury and with ankle sprains. Presently, midtarsal sprains may be underrecognized by radiologists; thus, greater familiarity with the MRI spectrum of ligamentous and osseous injuries at the Chopart joint is important for accurate diagnosis and clinical management.”