A Baker’s cyst can be a very confusing knee ailment for some patients. First, it has nothing to do with being a baker, but rather it was named for the surgeon who first described it, Dr. William Baker. Secondly, often it is not explained by the attending physician that the Baker’s cyst itself is not the cause of the patient’s knee problems, but rather a symptom of knee instability and developing osteoarthritis.

Typically a patient will call or email our office asking for help for the problems of Baker’s cyst. Some of these patients have had the cyst drained before and it has returned. Most tell us that the orthopedist who drained the cyst the first or even second time warned them that the cyst will return and that they will need some type of knee surgery to prevent it from coming back.

What is a Baker’s Cyst

In the knee, between the thigh bone and the shin bone, is the synovial sac. Filled with a thick (synovial) fluid, the synovial sac acts as a shock absorber, protecting the knee from excessive wear and damage. A Baker’s cyst (also referred to as a Popliteal cyst – simply meaning “back of the knee” cyst) develops when the knee becomes weakened through meniscal (cartilage tear) or developing arthritis. As inflammation in the knee develops, fluid collects; the synovial sac expands and pushes its way into the back of the knee. The characteristic bulge of the cyst is easy to identify and depending on the discomfort or pressure a treatment is recommended. Treating the symptoms and not the cause. 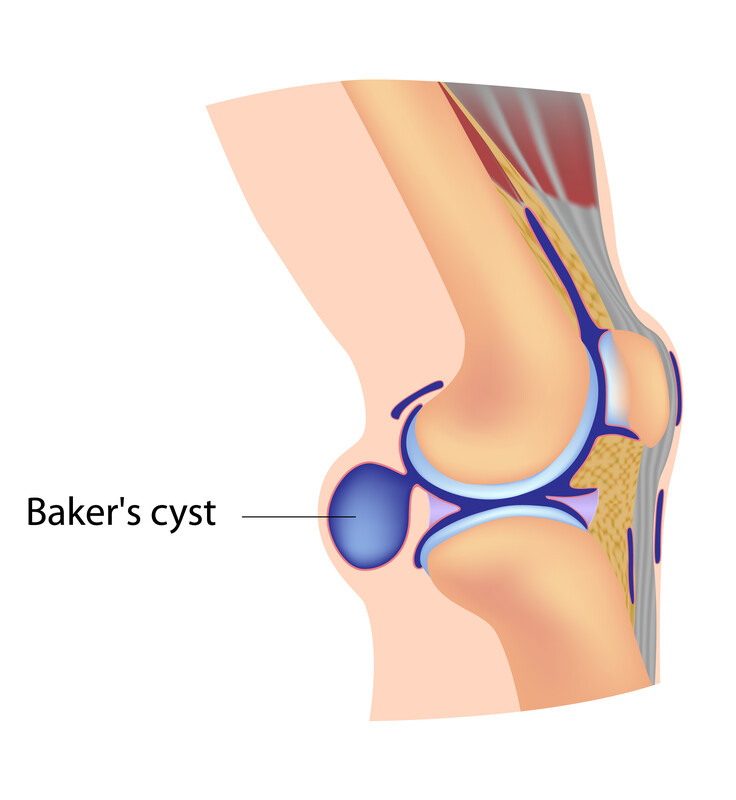 There is a connection between degeneative knee disease and the development of Baker’s cyst.

A study from October 2021 (1) investigated the presence of factors affecting Baker’s cyst volume in young and middle-aged populations. In essence, what made for a bigger cyst as opposed to a smaller cyst.

Cortisone and aspiration in a ruptured cyst – “there was recurrent Baker’s cysts in 38 (90.5%) cases which required reaspiration.”

Many people find relief of their Baker Cyst with aspiration and cortisone. But for how long? A recent study from November 2020 (3) explored the  effectiveness and safety of ultrasonographic guided aspiration performed with corticosteroid injection intra-lesional for ruptured Baker’s cysts. In this study 42 patients with knee joint disorder associated with ruptured Baker’s cysts were treated by ultrasonographic guided aspiration of fluid from the cyst and different points from the calf then intra-lesional injection of corticosteroids once or twice, 1 week apart.

In our chronic pain center we see many recurring cases of Baker’s cysts.

It is important to understand that our treatment for Baker’s cyst is to treat the problems of the knee that is causing the Baker’s cyst whether it is Meniscus tears, knee osteoarthritis, or knee instability. However, the Baker’s cyst may be a more immediate concern to the patient as it is causing discomfort and needs to be “drained.”

The typical treatment for a Baker’s cyst can range from rest to aspiration.  In cases where the cyst is causing pressure on the nerves of the knee or general discomfort, aspiration is performed to drain the fluid. This is usually followed by an anti-inflammatory to bring down swelling. Ironically, it is this very treatment that causes the Cyst to return.

As pointed out, the Baker’s cyst formed as a response to damage in the knee. Aspiration, anti-inflammatories, even arthroscopy to remove portions of damaged cartilage or meniscus suspect in causing the cyst does not fix the problem. When a Baker’s cyst is recurring, that means the knee is trying, through inflammation (swelling) to stabilize the knee. When the swelling is removed, the body’s attempt at fixing the problem is removed. The very cause of the swelling – damage to the soft tissue, a bone on bone situation – is allowed to continue unimpeded. It then becomes only a matter of time before the knee is in advanced osteoarthritic distress and a total knee replacement is called for.

It is important to treat the underlying joint disorder, if one exists, in all patients with symptomatic Baker’s cysts. This will help reduce the accumulation of synovial fluid and enlargement of the cyst.

As mentioned above, research suggests that the worse the knee is, the more burdensome the Baker’s Cyst is and the more likely or recurrence. Something causes the Baker’s Cyst to develop and typically that is knee instability. One possible treatment directed toward the knee instability in PRP or Platelet Rich Plasma Therapy. PRP treatments involve collecting a small amount of your blood and spinning it in a centrifuge to separate the platelets from the red cells. The collected platelets are then injected into the knee to stimulate healing and regeneration.

Stem cell therapy involves the use of bone marrow derived stem cells. These stem cells are also injected into to the joint to stimulate healing and regeneration.

The determination of which treatment is used is made during the initial consultation and physical examination of the knee. Afterwards we discuss with the patient the realistic healing options that these treatment can offer them.

In our practice we offer these treatments as injection therapy. Research suggest that (4)  bone marrow aspirate concentrate (BMAC)  and cartilage-derived matrix (CDM) during knee arthroscopy may also be effective treatments.